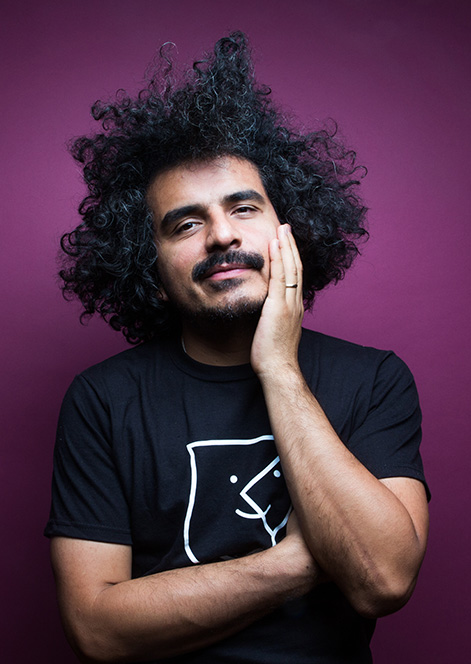 Since its dawn, Helado Negro has achieved a successful organic growth. The inclusiveness of myriad forms of meticulous music craftsmanship has kept Helado Negro flourishing with a powerful force. Roberto Carlos Lange, the voice and mastermind behind the act, has cultured his identity, ideology and musical dexterity with constant artistic and introspective development; Lange is an innovator involved in every phase of his creation. He has brilliantly accomplished powerful works with formidable statements, altogether praised by public and media. Yet, most importantly, every release has served as an exploration of practice of Lange’s unique nature of expression. Full-length LPs such as Invisible Life, Canta Lechuza and Awe Owe hold a common denominator of experimentation and refinement that serve as the solid foundation of Lange’s fundamental pillar in the process of music; by building upon every LP and EP every step unveils a new layer of Lange’s talent. A music making process which is illustrated with the chapters of originality throughout the Island Universe Story series, released in three EPs, which instantly became a distinctive mark to Lange’s commitment to produce and engage in music. The result is a contentious approach in creativity that exemplifies a perfect equilibrium of electronic music with shades in kraut rock bathed in mesmerizing rhythms and loops with hair-raising melodies. Lange provokes a sensorial, imagery and emotional experience. Lange pours his heart and full sincerity in his music. The lyrics, in his soothing and enchanting voice, are accompanied by musical arrangements which overall create a solid and well-rounded result.

Born in Florida to Ecuadorian immigrants and currently residing in Brooklyn, Lange’s upbringing provides essential elements to the backbone of his music, in particular his songwriting. Helado Negro has a consistent bilingual – English and Spanish– presence in lyrics. With a hybrid identity and music as a vehicle, Lange eradicates barriers of language and space hence positioning culture at a balanced intersection. His music crosses physical borders and creates a cross-cultural connection where Spanish and English exist in congenial and harmonious manner; as well as people being united through music in boundless space of real time.

Roberto Lange, as a multifaceted creator, uses various forms of conceptual expression; he also has a profound affinity and participation in art as a visual artist working with mediums such as video, sound and performance. Helado Negro, beyond the persona, serves as a creative space that encourages a cohesive collision of art and music. As a result, Lange’s career has carefully interweaved each aspect in an equally intense manner.  The idiosyncrasy in his production is clearly visible in every step, from details in the art of the album cover to songwriting and live performance, a well-tailored natural flux connecting every element.

Without any doubt, Roberto Lange has mastered the art of his hallmark sound, an elegant combination of carefully crafted sounds in accordance to an overall hypnotizing aura. Definitely, Helado Negro is a shivers-down- the spine listening experience.