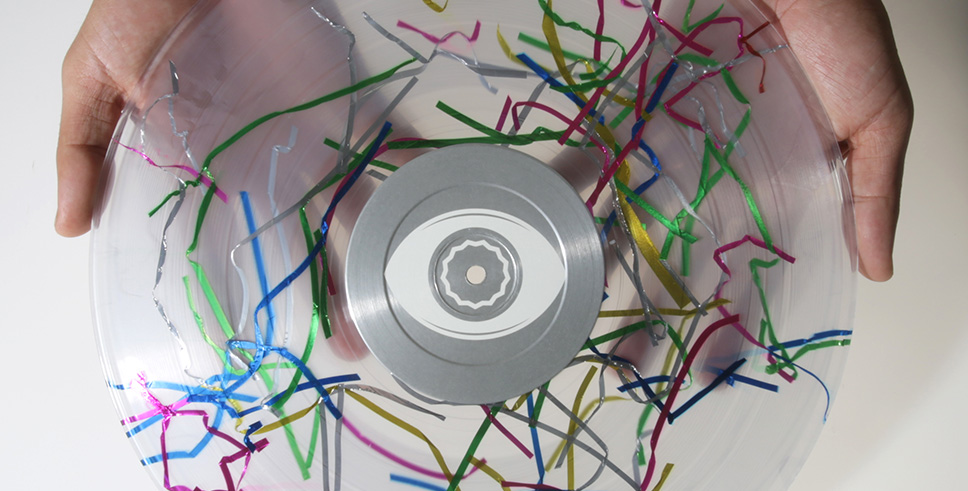 Human and machine also grow closer in Helado Negro’s Island Universe Story: Selected Works. Created alongside his recent performed work, the album compiles songs chosen from three “Island Universe Story” cassette tapes released between 2012-2014. If the tapes represent the subconscious exploration of other worlds in Helado Negro’s imagination, then this record, with its clear vinyl embedded with tinsel, suggests a certain leakiness between those dimensions. Some of the records contain silver threads, the sheddings of his Tinsel Mammals that have joined him on stage in cities far and near. Other records in this limited edition series contain the remnants or rumor of further realms, with the blue, gold, or multi-colored metallic sweepings left behind by creatures we haven’t yet met and can only imagine. Perhaps the tinsel itself recalls the actual, ionized tape, pulled from their original cassettes.

The album begins with a soft march in “We Will You,” building louder and joined by a fully present being pronounced in marble mouthed vocoder.  Recognizable as spoken language, yet indecipherable, this voice meets another, legibly human, and we’re game for more, “you’re a strange impossible feeling, let’s go strange impossible stealing.” From here each song offers a sketch of a unique land within the same cosmos. On “Enfocando“ Lange dreamily repeats the Spanish word for “focusing,” perhaps unconvinced that he should find gravity through the jaunty distractions of a spacy lounge or field of blooming curiosities. All electro save for Lange’s well-deployed heavy breathing, oohs and ahs, “Detroit” evokes an exhilarating night drive on empty wide-laned roads, while “Mamember” and “Salve Nada” each find at times a softer squish and ooze, an organic, fleeting, tactility. While primarily composed in solitude, the intimate wandering continues in the orchestral swarm of “Stop Living Dead,” created with composer Trey Pollard and a double string quartet and “Mitad del Mundo” featuring the talents of Wilco’s Mikael Jorgenson.

Limited to 1,000 pressings of a variety of colors with art work by Paul Coors, the album immediately suggests a relic loosed from a dream.  Set into motion Island Universe Stories: Selections carries us into the dark to find galaxies within galaxies, the human, the machine, the space between. We let go of charting the stars in resolute focus, and greet mysteries with wonder.