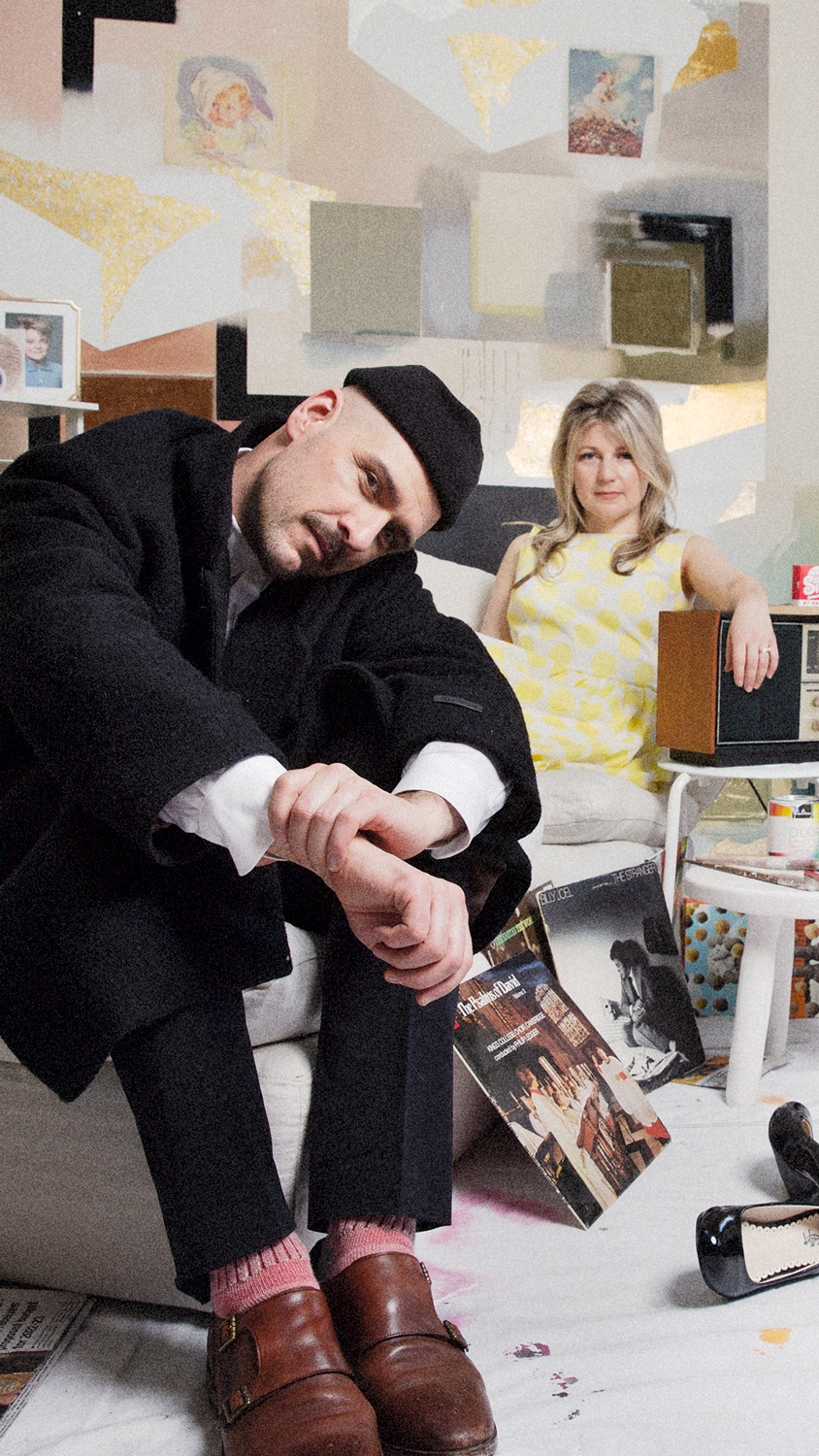 The Welcome Wagon is a married couple, the Reverend Thomas Vito Aiuto and his wife Monique, who execute a genre of gospel music that is refreshingly plain. Their hymns are modest and melodic takes on a vast history of sacred song traditions, delivered with the simple desire to know their Maker—and to know each other—more intimately.

Vito was born in Tecumseh, Michigan, and attended Western Michigan University where he developed a love for writing poetry. His first book of poems, Self-Portrait as Jerry Quarry, was published by New Issues Press in 2002. A self-described agnostic, Vito experienced a spiritual conversion at the age of 20 and soon after enrolled at Princeton Theological Seminary to study theology and prepare for ordained ministry.

Raised on a farm, by a gentleman farmer father and choir teacher mother, in the same small town as Vito, Monique moved to New York City after high school to study art, first at the Cooper Union (BFA), then Columbia University (MFA). Since then she has worked as a pre-school teacher, craftmaker for Martha Stewart, and as a mother. She also serves as the Welcome Wagon’s resident visual artist.

The Welcome Wagon began as husband and wife singing in the privacy of their home. Having little to no previous musical experience or training, Vito purchased a guitar with the desire to sing hymns with his family. With Monique accompanying on toy glockenspiel or harmonica, the two would amble through old hymnals, psalters and prayerbooks. Their inability to read music was no big issue; Vito simply made up new tunes to old words.

While their most familiar venue was (and is) their living room, the Welcome Wagon have been periodically coaxed to small stages at bars, parties, and seminaries throughout the New York City area, often joined by friends on upright bass, drums, piano, and banjo. These intimate arrangements preserve the delicate nature of the Welcome Wagon’s identity.

But there is another Welcome Wagon, the one that can be heard on their debut album, Welcome to the Welcome Wagon. This version of the band retains the heart and soul of pastor and his wife singing together, but dresses them up in the transcendent musical vestments of Sufjan Stevens, who produced and helped arrange the record.

Those who enjoyed the Welcome Wagon’s debut album will notice their distinct sound again in their sophmore release: Precious Remedies Against Satan’s Devices – loose, jangly, comfortable, a gathering of friends making music together. It’s at times jaunty and toe-tapping, at others quietly contemplative, an alt-folk gem that sounds very much like it comes out of the Asthmatic Kitty camp. But while the first album was recorded over the course of eight years in various venues, this one was done in five days at the library of an old rectory in Brooklyn.

In 2017, The Welcome Wagon released Light Up the Stairs, an urgent, lively endeavor, made so by the work of producer Jeremy McDonald. On Light Up the Stairs there are some re-tuned hymns, some original, liturgical and gospel songs, and some other songs that, while not explicitly religious, still feel holy — because the songs seek to explore the depths and joys of love and friendship: with God, with others, and Monique & Vito’s own relationship.

Admittedly, for a gospel duo, there’s far less soul than sweet sincerity in the casual songs of the Welcome Wagon. Vito and his wife are unabashedly Midwestern, ordinary and uncool. But this is precisely what sets them apart from the standard fare of contemporary liturgical music. It doesn’t feign emotion; it doesn’t pander to stylistic pretensions; it doesn’t pretend to be anything other than what it is: the result of countless, informal social exchanges between friends. A home-cooked meal followed by a few microphones taped to folding chairs. A family gathering, a summary of happy noises, and a room crowded with familiar faces. Sure, there are showy guitar riffs and piano codas and harmonica solos, a rowdy chorus, an imposing flourish of brass instruments like wartime canons. But at the heart of it—if you really listen carefully—there’s just a pastor and his wife singing joyfully in the quiet privacy of their own home.