Best Practices for Trying, with The Welcome Wagon 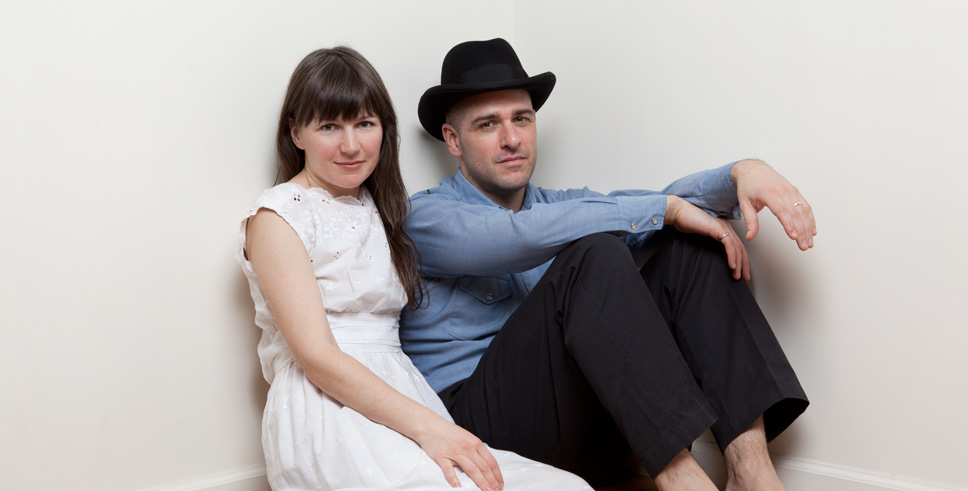 Sometimes things don’t work out the way you planned. And if you’re someone like Vito or Monique Auito of The Welcome Wagon, that’s a good thing.

When Monique Aiuto was in art school at Cooper Union in the 1990s, she made a sculpture out of three cement rings. They were about four feet high and sat two feet apart. After the rings were constructed, Aiuto inflated a weather balloon inside each. “I wanted to show this relationship between something soft and something hard, something solid and something that was light as air,” she says.

But once the balloons were inflated, they moved the rings, tipping two of them outward. “But they did not fall because they were held up by the balloon,” she remembers. “It was wonderful! It was exactly what I wanted, but I did not expect it to happen that way. So I had this sculpture that was this living tension.”

Other students and professors watched and wondered when the rings would fall. In the end, the piece survived for about three hours. “I had hoped it would stay up longer, but it was too fragile. That fragility was what made it special,” Aiuto says.

Maybe you’re currently doing one, or a combination of the following:

a.) Making art
b.) In the early stages of labor with your first child
c.) In the kitchen making dinner
d.) Preparing to defend a doctoral thesis, or
e.) Putting a car engine back together

At the beginning of an idea or event, maybe you have a moment of inspiration: you can see eyes opening, pistons compressing, string beans snapping. Then, when it comes down to actually doing something, there are questions. Could be something small, like, will my pizza burn? Or something big, like, when my kid is born will he be healthy?

Regardless of outcome, the vulnerability of putting something new into the world, even if it ends up resolving itself in an unexpected form, is why tension exists in process. And if you look, there are songs, friends, and other balms to help along the way.

Just ask Vito and Monique Aiuto. Together, they make up The Welcome Wagon.  They live in Brooklyn. Are married. Have a son. He pastors a church. And they make music. Throughout the recording of the latest Welcome Wagon album Precious Remedies Against Satan’s Devices, there were times when it looked like the recording was going to fall apart, or at least deflate.

Turns out, the imperfections ended up defining the record.

Shortly after Vito and Monique started making music in their living room, they began performing with Sufjan Stevens. Monique sang in Stevens’ “Michigan Militia Choir” and Vito played guitar and sang in his band. “I was his ‘guitarist’ for a few years. I had only been playing guitar for about a year when I began,” Vito remembers. “Man, I loved playing in his band, but at the same time, I cringe when I think back to those days. I would sometimes have to have him teach me rudimentary chords backstage before a show so I could play his songs. Or actually, more than once, I had to lean over and ask him what key something was in during a show. But he took it all in stride.”

Vito respected the way Stevens approached music collaboratively and inclusively. “He was giving people a voice, he was calling people to the stage (literally and figuratively) and seeing what they could do, giving them a chance to shine, whether it be as a singer or a costume maker or a tour manager or a choreographer,” he says. “So, we’ve tried to take up some of what he taught us. We love to include lots of people in our music and our shows. We try to add an element of theatre and earnestness and craft to our music; but alongside that, we also seek to have a sense of humor.”

The couple released their debut album Welcome to the Welcome Wagon in 2008, a process that took seven years from start to finish. To contrast, the choral and instrumental tracks and some vocals were recorded for their second album in one week. Instead of stress-inducing, Vito claims that setting strict deadlines was a good kick in the pants. “It wasn’t pressure that motivated us, but part of it is that if you don’t have a deadline, you’ll just keep revising. You’ll never really make anything,” he explains. “Our pianist and choir director Evan Mazunik gave us this motto of Duke Ellington’s that we kept bringing up. Duke Ellington said, ‘I don’t need time, I need a deadline.’ So I like deadlines. It means things get done.  And I wanted to get this record done.”

The Aiutos chose the week they would do the meat of the recording for Precious Remedies months in advance, booking musicians and taking time off work.

“We schlepped all the equipment over to the church library and loaded it all in on a Sunday night. The next morning when we arrived to work, we agreed it was a great idea to record in this unorthodox spot,” Vito says. “We could have booked a studio, but I really love this room, it means a lot to us. When you record, you spend so many hours there, and I wanted to enjoy all that time.”

Listen closely, and you will hear cicadas in the background of some tracks on the record. The chirping first came into earshot later in the morning on the first day of recording. The wooden, wide-open library revealed its own particular set of noises. The room wasn’t insulated, and airplanes, pedestrians, and cars on the street were audible. Not to mention the AA, NA, and Al-Anon meetings held in a different part of the church. When participants would enter or leave the building or go outside for a smoke break the sound reverberated into the makeshift space.

“Recording in a non-studio setting is hard in so many ways.” Vito recalls, “One of the nights we brought in the choir, it turned out there was this huge thunderstorm. Here we brought it in like 15 to 20 people, all these friends to sing with us, and we order in food and drinks and we want to make it into this big party. And it was, except that the thunderstorm prevented us from getting much of anything recorded.”

Inevitably, Vito and Monique had to decide if they should move or cancel the sessions. In the end, the chose to keep going on, primarily recording in the evenings.

“This probably worked to our advantage anyhow, as the air seemed to get a little magical at night,” Vito says. “The air got kind of quiet and wet and delicious and I think it helped the sound in places. The very last song, “Nature’s Goodnight” was recorded really late, maybe after midnight, and you can kind of hear the night, I think.”

The musicians spent time during the day refining arrangements and rehearsing.
“When we did record during the day, we’d try to dodge the cicadas and the other sounds,” Vito explains. “Sometimes it worked and sometimes it didn’t. And when it didn’t, and if we liked the take, we just kept it.”

The week the Aiutos spent making Precious Remedies with friends moved beyond an imperfect process and became a picture of learning to support and affirm one another.

“That is not to say that every moment was easy or fun–there were times of great stress, when we differed in opinions or had trouble communicating with one another,” Vito says. “But when it gets down to it, I want our time together as we make music to be an arena in which we can show each other care and respect and love. There were times where I was afraid that wasn’t happening, and it made me want to call a halt to the whole thing…I believe it turned out that we were able, with God’s help, to love one another well. And God redeemed and healed the places where we made mistakes.”

“It’s not just in making music that we work together,” Monique adds. “Last spring when we went on tour, Alex found us good restaurants to stop at, Jay drove the van and navigated, and we worked together teaching our parts to choirs we met up with. Every moment we are together is a chance to live out the purpose of the band, which is to welcome one another and love one another.”

“It’s hard for me to express what a delight it is to make music with other people, Vito adds. “It feels surreal and supernatural to me to play a song with other people, a song I made up in my head that all of a sudden is living out in the world, taken up by others and given new contours and colors.”

There’s a transience in community, be it with a group of creative collaborators, neighbors, or friends. With it can come the particular sadness of realizing that living or working alongside people can have an end.

“Endings are happening all the time,” Vito says. “You play a show, and it ends, and there is a sense of relief, but also there’s a letdown, too. You play a tour and you get home and it’s all over, and you’re glad to be home, but you’re also sad. You work so hard on a record, and when you’re making the record, you fall into a rhythm of life and you see the people you are working with so often, you get so close, and then the project is finished, and you move on, and it is sad.”

“But endings are necessary,” he continues. “And once you end something, it means you can begin something else.”

And while everyone, from accountants to cardiologists to musicians, are given tasks that by nature start and finish, what’s binding is that at the close, whether the project flops or ends more brilliantly than it began, whether it only lasts for a little while or is ongoing, there’s beauty in the frailty.

About The Welcome Wagon

The Welcome Wagon is a married couple, the Reverend Thomas Vito Aiuto and his wife Monique, who execute a genre of gospel music that is refreshingly plain.

As the twelfth year of the twenty-first century dawned, the economy was still in the tank, jobs were still scarce. The masses needed some good medicine, something a lot like Precious Remedies Against Satan’s Devices.