The Greatest Gift Out Now 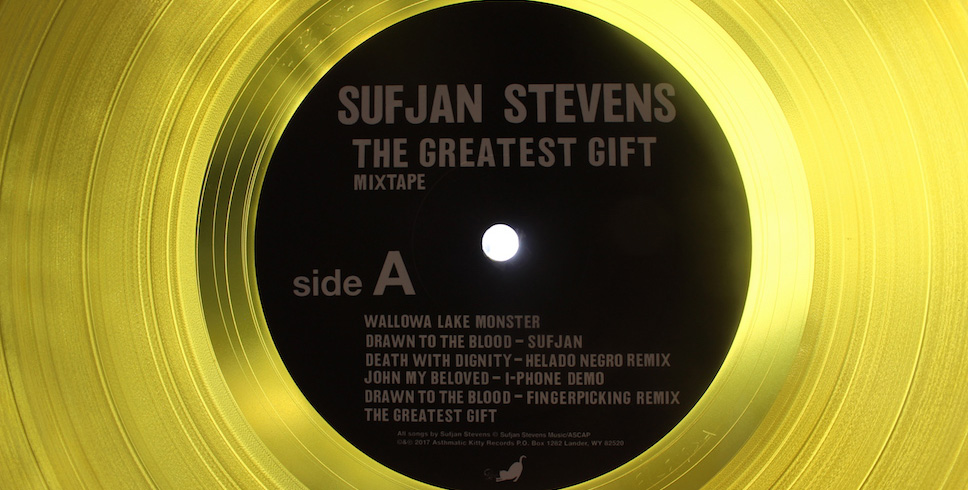 The Greatest Gift, previously available on cassette and streaming/digital, is now available as a translucent vinyl LP in your favorite local record store.

A portion of the proceeds from the release will benefit the Cancer Support Community.

The Greatest Gift unveils new remixes by several longstanding collaborators: Roberto C. Lange (a.k.a. Helado Negro) remixes both “Death With Dignity” and “All Of Me Wants All Of You;” Thomas Bartlett (a.k.a. Doveman) remixes “Exploding Whale,” a song previously only available as a 7-inch single; and James McAlister (a.k.a. 900X) remixes “Fourth of July.” The album features Stevens’ own remix of “Drawn to the Blood” and includes alternate and/or demo versions of songs from the original album, including a fingerpicking version of “Drawn to the Blood,” and iPhone-recorded demo versions of “John My Beloved” and “Carrie & Lowell.” Finally, the mixtape features four previously unreleased new songs recorded at the same time as the Carrie & Lowell.

New and reworked material, in its investigation of love, life, death, God, and the beautiful state of Oregon, serves as a contemplative companion to the original album. We hope you enjoy.