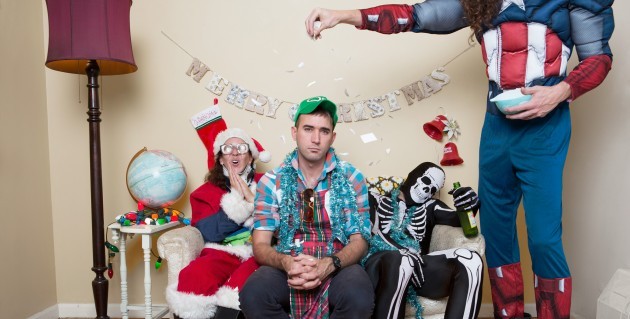 Sufjan Stevens will jingle-jangle his way across America, bringing yuletide cheer to your local music club, sharing reverent hymns and pop carols from his upcoming Christmas album Silver & Gold. “The Sirfjam Stephanapolous Christmas Sing-A-Long Seasonal Affective Disorder Spectacular Music Pageant Variety Show Disaster” will be a tragic-comedic feast for the ears and eyes. Sufjan will be joined by a 5-piece band (including Rosie Thomas, Nedelle Torrisi, Casey Foubert, James McAlister, and Ben Lanz) playing all the hits from both Christmas box sets. Send us your song requests!

All Grinches be forewarned: the show will consist entirely of Christmas music, inviting audience participation. Be prepared to sing along with bawdy bravura! Song sheets will be provided. There should be plenty of low-production props and gags, dollar-store giveaways, inflatable unicorns, cheap confetti, make-shift costumes, and Gloria in excelsis deo. Wear a santa hat, bring a flask (and a friend) and join the Sufjan Christmas Spectacular Sing-a-long in drunken revelry.

Check your venue for availability.

Note on Bowery show in NYC: Due to legalities with the State of New York, the Sufjan Stevens show will not go on-sale until December 19th, two days before the show. The goal was to stop scalpers from getting ahold of the tickets by making tickets available only through will call. Unfortunately, state law prohibits paperless shows and making this on-sale two days before the Sufjan show was the best solution. Thank you for understanding as we try to provide an equal buying opportunity for all fans. We are truly sorry for any inconvenience this has caused anyone.

Who can save us from the infidels of Christmas commodity? Look no further, tired shopper, for your hero arrives as the diligent songwriter Sufjan Stevens: army of one, banjo in one hand, drum machine in the other, holed up in his room, surrounded by all the weaponry of Yuletide incantations.