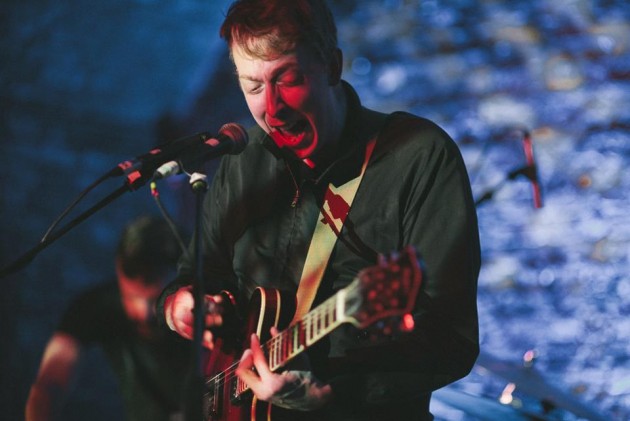 DM Stith has hardly been silent in the years since the release of his eerily intense Asthmatic Kitty debut, 2009’s Heavy Ghost. The Revival Hour, his project in collaboration with John-Mark Lapham of the Earlies (Secretly Canadian), put out its first full-length earlier this year, and is gaining momentum with a new remix EP, a new video, and soon, a European tour.

The dark, soulful sound of the first Revival Hour LP, Scorpio Little Devil—sometimes nostalgic and warm, sometimes noisy and futuristic, but always densely, lavishly arranged—has garnered especially rapturous acclaim in the UK press. The Independent praised the duo’s “exotic musical creations,” and the Guardian argued that contrary to the name of the band, “five seconds of this stuff,” hardly a full sixty minutes, were all the Revival Hour needed to revive its listeners.

Now, two tracks from Scorpio, “Hold Back” and “Run Away,” have been remixed by Lost in Edit and the Earlies, respectively, for a 7″ available from Bandcamp and totally free to download until May 26. The smoky Memphis sound of “Hold Back” has also become a suitably sultry new music video, directed by the Antiphon Music Group and streaming on YouTube and Vimeo.

Coming up this fall, European audiences will get a chance to hear The Revival Hour make their music in person, with dates already announced at Vieland’s Into the Great Wide Open Festival on Sept. 6 and 9 in the Netherlands, at Radar in Aarhus, Denmark on the Sept. 11, and at London’s Sebright Arms on Sept. 17.

You can buy Revival Hour music all in one place here.

DM Stith’s songs come out of a knock-about life, pressed by the urge to overcome insecurities, to probe questions, to revisit dreams and visions.