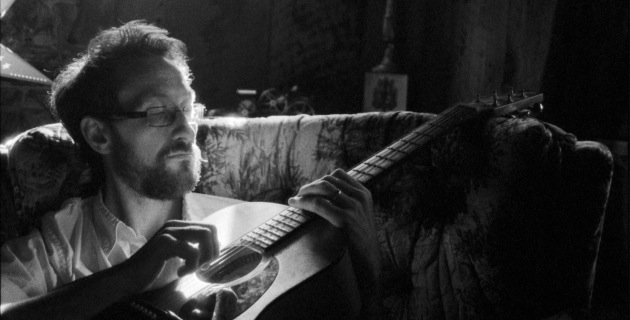 If Chris Schlarb’s new solo album feels like a moment’s rest—a brief retreat, a meditation in solitude—that might be because this is exactly how the album was recorded.

The story of the making of Making the Saint, out today on Asthmatic Kitty Records, is ultimately simple: Chris Schlarb needed a break. As the composer and bandleader of the Psychic Temple project, Schlarb has lately been demonstrating his auteur-like ability to put into place all the details of an intricate musical tableau. Last year’s Psychic Temple II LP set idiosyncratic pop tunes and more abstract musical explorations in highly complex arrangements, and accordingly the ensembles Schlarb brought out to support it were some of the biggest he’d ever wrangled.

After all of that, he felt the need to do something a little more intimate. He gathered up his instruments and headed by himself to a 19th-century cabin in the dusty San Bernardino Mountains, where he proceeded to lay down the tracks that would become Making the Saint.

A four-track, full-length album, Making the Saint is in its own way as ambitious as Schlarb’s recent Psychic Temple work. But this time, the grandeur is less in the layers of musical detail than in the expansive explorations of deep, interior spaces. The album’s two short, bona fide “songs,” the mystical ballad “The Great Receiver” and the jazz standard “My Foolish Heart,” are generous in their own, quiet way—”My Foolish Heart” looks for the sophistication in simplicity, and the negative space of “The Great Receiver” hum with cosmic ambience.

But these tracks alternate with yet more probing meditations, seemingly free-floating improvisations anchored deep down by musical stasis: the overtone-rich, iridescent drone of the opening title track, or the slowly looping, ruminating harmonies of “The Fear of Death Is the Birth of God.” Making the Saint finds freedom in simplicity and, in the emotional and spiritual resonances it evokes, turns out to be not quite so simple after all.

Making the Saint is now available to own as a digital download, on CD, or on an LP record, pressed to white vinyl.

Chris Schlarb is a musician, composer and producer based in Long Beach, California.

Chris Schlarb recorded his new album inside a cabin in the San Bernardino mountains of California thinking of you, relaxing on a Sunday morning.