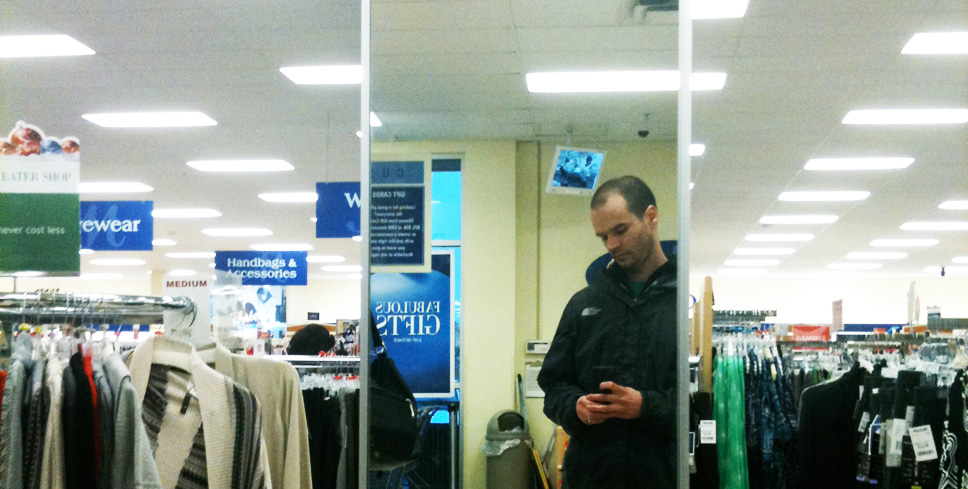 Work itself can be a creative act.

If you had to place a wager on it, odds are that Michael Kaufmann uses the left and right sides of his brain in perfect balance. There aren’t many other ways to explain how Asthmatic Kitty’s former A&R director and jack-of-all-trades can be creative, accessible, esoteric, participatory, and efficient, all at once. There are practical and imaginative parts in everybody’s head, sure, but Kaufmann maintains clear access to the connection between these disparate parts; and between art and business. For Kaufmann, work itself can be a creative act.

Dabbling in music and performance art for more than 15 years, Kaufmann played in the experimental group Therefore between 1997 and 2006. Known for their immersive live sound performances, including a 22 hour and 30 hour set, Therefore’s last show ran more than 12 hours and ended with the duo selling off all of their instruments and gear. They  shared exhibition space with Robert Rauschenberg and Jessica Stockholder. Kaufmann performed as “Slo-Ro” in the rock and hip hop collective Soul Junk from 2001 to 2005. Presently a member of Land of a Thousand Rappers, he is in the process of releasing five albums and a novella in early 2013.

His creative work developed while studying film, video theory, writing, and, in his words, “trouble” at Bucknell University in the middle of Pennsylvania. It was during his undergraduate years that he tried his hand at experimental art and music.

After completing college, he interned at the Chinati Foundation, a Texas-based museum of contemporary art, and served as a film archivist with the New York Public Library’s Donnell Media Center. Next he returned to school, earning a Masters in Library and Information Science at San Jose State University. While completing the graduate program he founded the S.C.U.M. (Southern California Underground Music) Collection at San Diego State University.

Kaufmann began doing A&R, label development, and project management with Asthmatic Kitty in 2002. A few years later he relocated to Indianapolis and continued building the family he had started while in San Diego. Like living in the center of the country, Kaufmann’s kids help him understand compromise and the importance of meeting in the middle.

Kaufmann still lives in Indianapolis, where he manages a small army of philanthropic and professional efforts. To name just a few, he serves as: board president for the Indianapolis Museum of Art Contemporary Arts Society; member of Indianapolis’ CEO’s for Cities; and board member of the Indiana Recycling Coalition, IUPUI’s Center for Urban Health, and the Reconnecting to Our Waterways Initiative.

He stepped away from official Asthmatic Kitty work earlier in 2012 to focus full-time on supporting arts, ecology, and equitable livability as Director of Special Projects and Civic Investment for the Health & Hospital Corporation of Marion County.

Before Kaufmann officially turns in his AK badge we wanted to get in his head and ask him how a performance artist with a punchy resume became partner in crime with a little label like ours. Below, he talks about living in the Midwest, the Asthmatic Kitty community, and how his work life and creative life overlap.

AK: How does living in Indianapolis inform your work and art? Most people think of that city as all sports and no substance, care to debunk any myths?

MK: First off, sports are substance. But yes, we are not limited to groin pulls and tire skids. We are a city of producers. We make things. We always have. If you are primarily a consumer and want unlimited options for things to consume, we might not be the best place for you.

That said, more and more producers are moving here, or being birthed and maturating, and now we are starting to have options to consume. What I do love about Indianapolis is that we are collaboratively and diligently creating experiences, environments, places to live, work, and play. If you want to feel like you are a part of something and can have an impact and build a 21st century city, you will be in good company.

AK: Points taken. But really, why live in the Midwest and not on one of the coasts?

MK: Everything begins at a middle. The universe is continually expanding and contracting around its origin middle. A black hole, though devoid of light, at its middle is full of potential and possibilities. The middle is an intersection, a tipping point, a target, an innovation. I very much believe in the middle. That is where I live. I can reach out in all directions from the middle. On the left and the right, you can only reach backward.

AK: Let’s talk about your time at the label. How has AK changed since you began working here more than a decade ago?

MK: Asthmatic Kitty has and always will be first a community (even if a distance community), supported by the belief that the how and the why are just as important as the what you do, and a mechanism to support and promote what we feel is important and worthwhile for the enrichment of thought and heart. How has it changed? It has learned that putting out records is just one very small part of this.

AK: What do you think differentiates AK from other labels?

MK: Asthmatic Kitty is important because it has very seldom concerned itself with image. I used to worry about this, but realized over time that image is an illusion. There isn’t an Asthmatic Kitty mold for artists to fit into. The label is willing to support them in the way they need to feel supported, and allow folks to make the art they want to make. The label has been successful in a monetary sense because money was always the last consideration.

Of course it has to sustain, and those decisions do need to be made, but it favors art over commerce. This can sound pretentious, but I think the difference here is that instead of building a brand, we invest in people.

AK: Name two or three accomplishments you’re most proud of from your tenure here.

MK: These aren’t my accomplishments, just things that I am proud of the label for:

1.) Our artists and their constant musical journey and balanced infusion of experimentation into their art and music.

2.) Not always running a record label like a record label. Curating art shows around the country as part of our Unusual Animals series which included hosting a SXSW showcase with almost entirely Texas bands in an effort to celebrate why Austin and Texas is great the other 51 weeks of the year.

3.) The wide variety of our non-traditional marketing, such as the ever popular critic-based pricing for Jookabox in which we used the Pitchfork score to determine the cost of the album. We were always, and I am sure will continue to be even beyond my presence, interested in deconstructing every element of a label and an album.

AK: By definition, performance art is concept-driven and can be as esoteric as you like. But business, even creative business, has to translate and turn a profit. Is that idea ever uncomfortable, or have you been able to separate creative work from work-work?

MK: I have always run Asthmatic Kitty as an art project. The more I began to examine the blurring of art and life, I realized that artistic products, output, activity, and business are also part of life. And also realizing the more mundane aspects of daily ritual and habit have aesthetic qualities and opportunities. No, I don’t brush my teeth like a ballet dancer, and I am not nearly as self-relfective or calculated as I might be portraying myself at the moment. But that said, this has become very important for me. Instead of living a life of art I decided I wanted to live artfully.

Eventually I understood that minimalism is only one form of expression in this wide complex spectrum of life and art languages. I began to write long-winded raps, I began to build messy cardboard sculptural costumes, I began to run a record label as performance art. For me, business is a medium that has just as many aesthetic and conceptual principles as sculpture or film or literature.

The motivation then isn’t how much money can you make, but how are you making that money and in turn using it to support more artists for greater and deeper exploration of the world.

AK: Does it take more courage to perform in front of people or manage creative people?

MK: Depends what I am wearing.