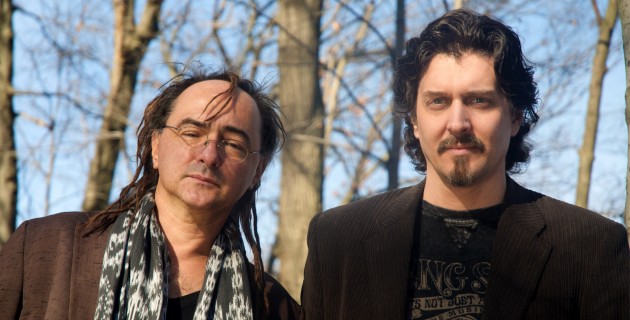 Nick Berry and Kurt Biroc make music prolifically while keeping day jobs. The duo that form the New Jersey-based band Dots Will Echo move back and forth between the half-lit world of kicking around ideas, dreaming up sounds, and playing riffs in a garage to the office-lit reality of finishing a project, checking a box off a to do list, and turning out the lights. Dots Will Echo’s debut release Drunk is the New Sober/Stupid is the New Dumb is available July 24th on Asthmatic Kitty. Recorded over the course of three days, the album ranges from perfectly impulsive to transcendent.

Berry and Biroc work together (Biroc is Berry’s boss) and make music as Dots Will Echo on their off hours. Berry plays everything from Andean charango to hammered dulcimer and Biroc plays drums on the album. The duo tease out irregular, tattered post punk-infused pop hooks that move between capricious and infectious. “I meant this to be a very raw recording, capturing the way we sound live,” says Berry. He describes Dots Will Echo’s sound as, “A little bit The Incredible String Band, a little bit AC/DC. A little bit Nick Drake, a little bit Cheap Trick.”

Before forming Dots Will Echo in 2004, Berry played with the power pop trio DWE Mk I, recording a single that made it to No. 4 on Sweden’s rock charts. In 2001, Berry contributed to the Will Ackerman track “Fear Not, Mary.” The song appeared on Ackerman’s Grammy nominated album Hearing Voices.

Drunk is the New Sober/Stupid is the New Dumb comes in at an epic 23 tracks. The CD was originally slated to be split into two disks. The double LP includes a code to access digital bonus track downloads.

About Dots Will Echo

To Dots Will Echo, making their music is as natural as breathing, walking, or telling each other dirty jokes. Fortunately, now the rest of us get to listen in.

Drunk & Stupid boasts 19 songs overflowing with insanely catchy melodies, endearingly off-kilter arrangements, and a strangely satisfying blend of the divine and the absurd.