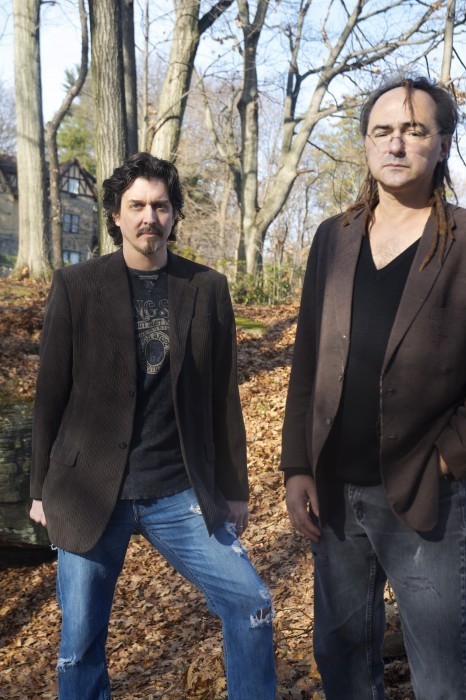 Nick Berry, whose elegantly twisted musical mindset defines Dots Will Echo, loves to tweak expectations and play with people’s minds. We are, after all, talking about a man who has sung onstage from inside a plastic trash bag, performed minimalist keyboard instrumentals whilst wearing a gasmask, recorded under the artistic alias of Norton Anti-Virus, and given the world such song titles as “Gandhi Had Gorilla Balls Made of Finest Steel” and “Help! Gerard Cosloy Is Chasing Me With An Axe!” FYI, Gerard Cosloy runs Matador Records, but the usual indie-rock fare is far removed from what makes New Jersey duo Dots Will Echo tick.

Multi-instrumentalist Berry — whose intimidating sonic arsenal includes everything from your standard rock axes to hammered dulcimer, glockenspiel, and Andean charango – and drummer Kurt Biroc thrive on jarring juxtapositions, both in their influences and in their own music. Berry describes Dots Will Echo as “A little bit The Incredible String Band, a little bit AC/DC. A little bit Nick Drake, a little bit Cheap Trick.” Besides being musical accomplices, longtime buddies Berry and Biroc work at the same day job, where Biroc — who Berry fondly describes as “The Miles Davis of obscenity” – is the singer’s boss.

The pair began banging around in Biroc’s garage in 2004, sometime after the dissolution of DWE Mk I, a more power-pop-oriented trio that became a cult favorite in New York City and somehow earned the quirky distinction of scoring a No. 4 single on the Swedish rock charts. The already outrageous Berry had little trouble tapping further into his freaky side with Biroc egging him on; together, the duo crafted a sound that blended folk-flavored melodic touches with ragged-but-right post-punk edginess, pure pop hooks, and an avant-garde eccentricity that’s engagingly playful and completely natural. When Berry and Biroc start bashing it out, either in the latter’s garage, which functions as their mad-scientist laboratory, or on stage, accessibility and experimentation collide in a giddy, glorious free-for-all that can only be properly described as Dots Will Echo. But lest that sound too lofty, Berry admits, “We’ve actually had rehearsals where, after working together all day, we just ended up talking the whole time.” For all his irreverence, though, Berry is fully capable of sitting at the big kid’s table – for example, he contributed the song “Fear Not, Mary” to Will Ackerman’s Grammy-nominated 2001 album, Hearing Voices.

Berry is the kind of DIY home-recording obsessive who bolts himself into his basement for long, sweaty sessions, layering one exotic instrument after another onto songs that he says often come from his dreams. He emerges having creating crooked little homegrown masterpieces that run on their own internal logic but possess the power to communicate on a gut level to anyone willing to listen. It seems anomalous for such engagingly off-kilter sounds to originate in the quiet, unassuming environs of Ridgewood, New Jersey, though bands like Real Estate and Titus Andronicus happen to hail from the same stomping grounds. “Given that there is no place to play in our upscale area,” muses Berry in his typical tongue-in-cheek fashion, “one has to wonder why Ridgewood is the new Seattle. Maybe it’s all the good food.”

If you get the impression that this band doesn’t take life too seriously, you’re correct, but even though Berry’s music is chock full of his endearingly oddball sense of humor, he’s dead serious about his craft. For years, often in the least encouraging settings, he has forged ahead with his work, not in response to any outside impetus, but simply because he had no choice. To Berry and Biroc, making their music is as natural as breathing, walking, or telling each other dirty jokes. Fortunately, now the rest of us get to listen in.