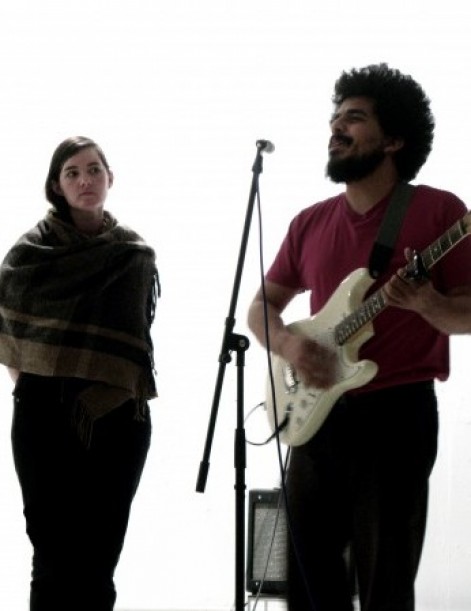 A beautiful thing happened when Asthmatic Kitty artists Helado Negro and Julianna Barwick first met: they got to know each other. The result, a new collaborative band, OMBRE, and a brand-new full-length record, Believe You Me.

Rewind to 2009, the end-days of the once-fertile empire of MySpace. Helado Negro was (as folks were prone to at the time) clicking through the friend-of-a-friend band pages when he came across Barwick’s music. The gears turned, the cartoon lightbulb dinged on above his head, and he was in.

Fast-forward to 2010 and a collaborative tour with Barwick and Helado Negro. The important thing here is that the two didn’t know each other yet. The resulting tour was a grand adventure into the realms of getting-to-know-you-ness. Bonding-on-the-highway-ness. Classic-American-roadtrip-into-the-heart-of-buddy-ness!

After the tour, they decided to further their fellowship by—as says the good Dr. Dre—getting down in the lab with a pen and a pad. The sessions for Believe You Me began in May of 2010. Says Helado Negro, “We really had no clue what we were going to make and we would just throw things out there and record. The majority of it took place at my personal studio, Island Universe Space. We would just jam or record vocal ideas or whatever; it was all just organic and at the same time we were getting to know each other even more as friends.”

OMBRE’s debut is Believe You Me.

Based on a combo-punch of acoustic instrumentation and programmed electronics, the album ranges from stripped-down and summery ambient jams to full-band psyche explorations. The mood is kept mellow; it’s a cozy, friendly sound, enveloping and embracing. The album feels like the product of a new friendship, the tender walking-on-eggshells moments, the celebration, the growing respect, the laughs, and the straight-up moments of wild-hot synchronicity and shared architectural creation.