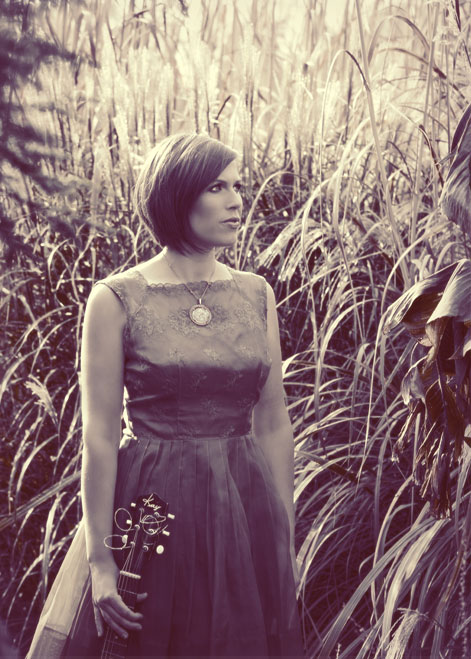 The reason we’re writing you today is we want you to meet our good friend Liz Janes. And more so—and we’ll get to this later—to meet the realized incarnation of her vision, the sparkling vision of the individual. Namely, her new record, Say Goodbye, the culmination of a lot of fighting and surviving and reworking all-things reworkable. Liz’s music-story and life-story involve a Great American Novelesque chain of living leading up to the Liz of 2010. Shorthand version: the piano recitals in the DC suburb she grew up in. Then sneaking off to jazz clubs in Philly. Or her sudden and dramatic withdrawal from the performing life after an incapacitating dose of Stage Fright-itosis (she was 13.) Then came her college days in the fertile music town of Olympia, Washington where Liz knocked around in the local improv scene, making loud noise with some very talented pals (one of them being Old Time Relijun’s Arrington de Diynoso; they played in Toro Sec Toro together.)

As satisfying as Olympia’s noise scene was Liz became a covert player of folk songs, a secret singer, a strummer in cognito! On a beat-up Sears guitar she was writing lullabies and gospel songs behind locked door, her first ever songs, the nascent brain children of a soon-to-be accomplished and busy songlady. But let’s back up a sec. Right now we’re 10 years in the past. Picture yourself in Olympia around the turn of the last century. Walls of trees as green as jade. Smoky mountains. Rain year-round. The basement shows, the house shows, K Records folks doing what all good K Records folks do. Once upon a time Liz was deep in it, deep in the avant of avants, deep in the combustion of spontaneous out-there-orama sounds. But those secret guitar and voice songs were always there. Hidin’ out. Biding their time.

Then one fateful day she snuck off and set said songs to 4-track. In Liz’s words it was terrible. Says Liz, “I am a one trick pony. Everything I do—there is one way that I do it. There is one way that I draw. One way that I sing. One way that I play guitar, and write a song. I often struggle with not being more versatile or multi-talented. Comparing myself to others is a terrible trap. It’s not that I don’t challenge myself to do more and try new things and to grow. It’s just that I always come right back to being me, and making what I make.” Liz’s faith in those hidden songs might have been low but as a true and pure maker of music she wrote them because she had to, because they were there, gestating, waiting to be born, audience notwithstanding. And the secret remained just that, a secret.

Say Goodbye abandons the searing, epic psyche blues vis-a-vis deconstructed old timey of her previous work for an intensely personal, truth-filled, new kind of pop music. Aided and abetted by Rafter’s mad skills, the resulting piece of music is grand without the -ious and lush without treading on well-shod shoegazey paths. It’s a warm, human, ornate new thing, lyrics paired down to the most minimal of philosophic wonderings/wanderings. The music ebbs and flows, bubbles out baroque passages, and envelops the listener in electronic warmth and cosmic analog sound, horns a-blazin’, drums a-tishhking, Rhodes piano a-Rhodesing.

In the 10 years from Olympia to Say Goodbye Liz has bounced all around the country. (If you ask her she’ll tell you she was too west coast for the east coast, too east coast for the west coast but that the great state of Indiana, with proper fairy tale resolution, is juuust right.) It’s been a busy and colorful ride. The kind of fulfilling, healthy party most honest musicians only dream of. Good bands, long tours, new friends, great songs.

Liz sums up her trajectory from piano lessons to ’10 saying, “I always loved music, but then I learned to love sound. I was always too shy to sing, but then I learned to make noise. I never understood the discipline of art, and only enjoyed the spontaneous. Now discipline is my only way to access the spontaneous. This is growing up, and this is growing older.”