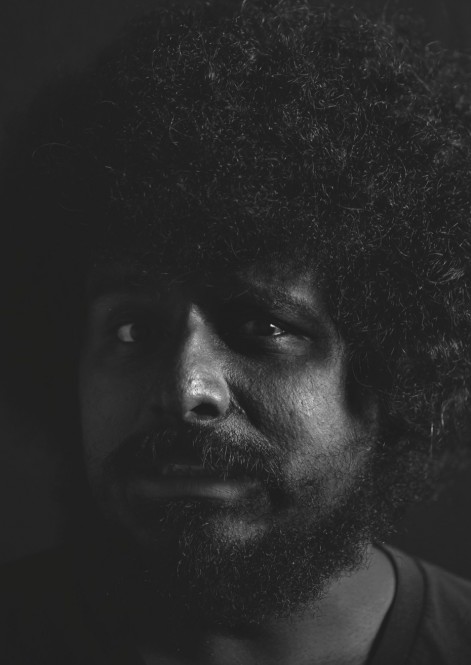 Like any complete story, this one begins with a birth. Two of them, actually (though one is part and parcel of the other.) Roberto Carlos Lange was born in South Florida in 1980 to Ecuadorean immigrant parents. Epstein, his longtime, deeply-personal solo project, was born 20 years later from the mixtape and the echo button of his Lasonic boombox. Lange, also the leader of Asthmatic Kitty act Helado Negro, was attending the Savannah College of Art and Design and the humidity was pickling the cassette. His ears were sweaty. His left ear was full of his studies–Pierre Schaeffer, David Tudor, and Stockhausen. His right ear was spilling over with extra-curricular listening to O.D.B., Stereolab, Mr. Oizo, The Sea and Cake, Mobb Deep, and Miami electronic music. The combination of both began to seep out of his fingertips, onto his MPC sampler, and the result of all that heat and osmosis was the formation of two distinctive musical entities–one a duo with drummer Matt Crum (Feathers, As Friends Rust, Rocking Horse Winner) called ROM; the other his solo outing as Epstein.

Lange’s first Epstein release, a self-titled 12″, arrived in 2003 via M3RCK Records. This led to interest from the Beta Bodega label and the development of yet another alias, Boom & Birds, which saw Lange joining forces with Adam Heathcott, owner of Hometapes. Later, Beta Bodega brought Lange onto their roster and proceeded to release the first four Epstein albums in Japan. Thanks to his relationship with Beta Bodega, Lange began collaborating with Guillermo Scott Herren’s Prefuse 73, eventually leading him sign on with Herren’s Savath & Savalas as a full-time member.

Despite keeping his hands in multiple projects, including his work with visual artist David Ellis and his stint producing the recent Bear In Heaven record (dubbed by Pitchfork as some of 2009’s “Best New Music”), Lange still found time to don his Epstein cape and tights to release four full-lengths, remix folks like Machinedrum, Sawako, Mr. Cooper, and Serengeti & Polyphonic, and tour Japan and Colombia, sharing the stage with South American electronic artists Matias Aguayo and Abe Duque.

Now in celebration of the Epstein project’s 10th birthday, Asthmatic Kitty is breaking out the cake and streamers and making Lange’s previous releases available for the first time outside of Japan. Besides a full back catalog reissue (with sweet cover art by La Mano Fria), Epstein will also be releasing two new full-lengths this year through the label, the first of which, When Man is Full He Falls Asleep, hits digital stores March 9th, 2010!