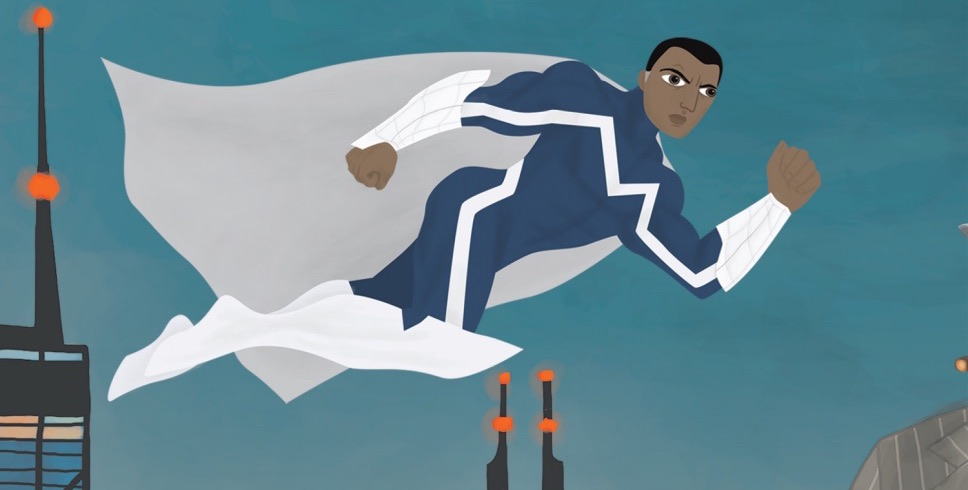 In 2005 Sufjan Stevens released Illinois, his fourth album and the second in his 50-state project. Sufjan fans with long memories might recall a minor hiccup in our release of Illinois as it related to the inclusion of a certain Metropolis-born man of steel.

While we do love balloons, we’ve always missed the imminent presence Big Blue brought to the album’s cover art, short-lived though it was. But things are very different in 2015 than they were in 2005, and different times call for different heroes.

So today, exactly ten years after we released the double LP of Illinois, we’re proud to announce a special 10th anniversary edition of the LP that includes Chicago-born Blue Marvel on the cover.

The double LP will include an “Antimatter Blue” and “Cape White” vinyl colors. The audio for the special edition comes from a 2014 remastered version of Illinois. We commissioned children’s book artist and the original Illinois cover artist Divya Srinivasan to portray Blue Marvel in the style of the original art. We’re pressing 10,000 double LPs of this edition. And we might include an extra surprise so stay tuned.

Big thanks to everyone at Marvel for giving us permission to feature Blue Marvel.

In the 1960s Adam Brashear was a young man who served his country as a U.S. Marine. When he discovered his super-powers, he fashioned a secret identity with which to protect his country; the Blue Marvel! He served as a hero for years, and was one of the most popular heroes of his time. Yet Adam had a secret, he was an African-American, a fact not lost on the government. As a precaution against so much power in the hands of a black man, they took steps to control him, even going so far as to plant a Spy for him to date. His career as the Blue Marvel ended after he faced the Anti-Man, with his ethnicity revealed, Adam was pressured by the government to retire.