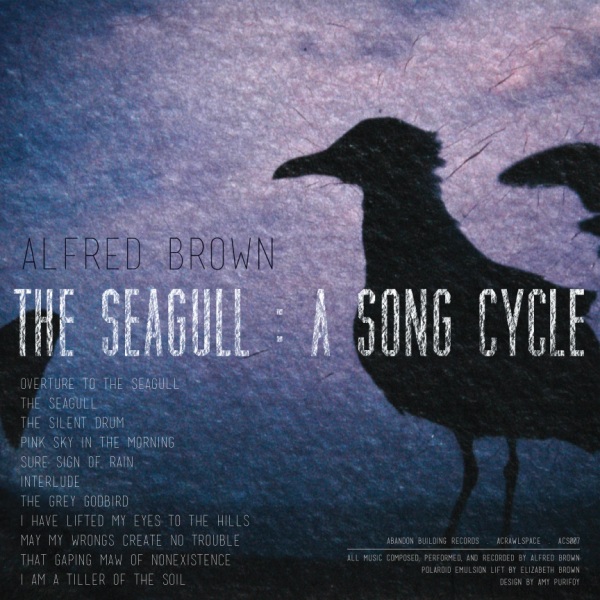 Earlier in 2012 we released Alfred Brown’s Music for Moving in Slow Motion as one of our Library Catalog Music Series (if you haven’t heard it you can hear it here).

Originally intended as a soundtrack for a film adaptation of a play of the same name by Anton Chekhov, this collection eventually developed into an entity unto itself. In this adaptation, Chekhov’s tragic figure Konstantin Treplev was to be portrayed as an experimental composer of music, rather than a playwright and “The Silent Drum” was intended to be one of Treplev’s personal compositions. This cycle can be listened to as a chronological account of the story or as a meditation on the main themes. It is the internal dialog of a man plagued with self-doubt and self-pity, jealousy, and paranoia. It is the soundtrack that no one, but Konstantin can hear. These are his prayers to a god that he does not believe in. Prayers to save him from himself. Prayers that go unanswered.

You can hear and purchase The Seagull: A Song Cycle below, or here.

Asthmatic Kitty’s Library Catalog Music is a series of instrumental albums designed for possible use in films and television, background sounds for home or office, or personal needs, such as relaxation, stimulation, meditation, concentration, or elevation.

Music for Moving in Slow Motion is about the slowing, halting, and reversing of the directional flow of linear time. It is about the significance of the possibly infinite space that exists between any two instants.