Like the swimmers floating peacefully on CALAMITY’s cover, The Curtains’ music hangs suspended, buoyed-up by a strange spring of  optimism and curiosity. Ideas surface unexpectedly and blossom for  just long enough to be grasped, but no longer –

To truly take it all in, you can’t ask yourself what’s just happened or what is about to happen, you can’t hold on to old ideas of what a  song should be – The Curtains music has a mind of its own and like a  stubborn weed, it grows where it wants to. To allow their songs to develop each in its own way, The Curtains have left lots and lots of  space on CALAMITY. There are never more words or sounds than are absolutely necessary, and this kind of economy is the album’s  deliberate aesthetic intent.

Self-taught and self-invented like The Shaggs, like Jandek, like Sun  Ra, The Curtains have found their own distinctive voice, but have  never stuck to a formula. With each album, they begin again from the  ground up – and as strange as the songs on CALAMITY (their fourth  album) are, there is an irresistible charm which has intrigued the  many who have heard their records or seen them play live on tour with  such groups as Beirut, Final Fantasy, Maher Shalal Hash Baz, The Red  Krayola, The Dead C. and Liars. 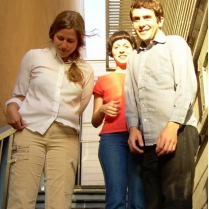 Chris Cohen was given his first drum set at the age of 3. Pictures in the family album also show a plastic mic taped to a floor lamp and connected to nothing? This is when he began in earnest what he is still working on today in The Curtains. Inspired at a young age to […]