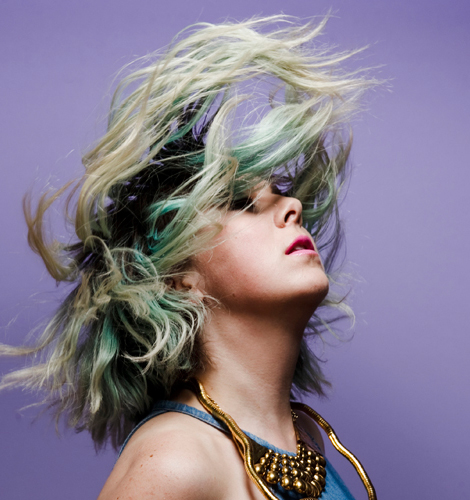 Mozart’s Sister – the solo project of Montreal’s Caila Thompson-Hannant she started back in early 2011 – delights in making glittering, celebratory pop with an underlying strain of brittle, claustrophobic energy. By marrying the accessible with the decidedly off-kilter, she displays a similar vigor and charisma to female contemporaries Grimes and tUnE-yArDs, both of whom too learned their trade among the same fertile hometown scene as her.

Since attracting a ton of buzz for her entrancing live shows and for first EP Hello, Mozart’s Sister (aka Caila Thompson-Hannant) has been head-down in her bedroom writing her debut album. For anyone who’s been following her work – and for new listeners – Being is Mozart’s Sister expressing macrocosmic ideas about life with panache and abundant hooks.

Being is fundamentally a pop record. But if you’re looking to catalog her music more than that, you’re going to have a hard time; Caila describes Being as an intentionally fractured album. “It was far reaching. Things didn’t always connect, but that was part of the whole idea,” she says. Which is representative of the best music, and maybe the best of life: looking for order in chaos, not always finding it, and living with whatever happens next.