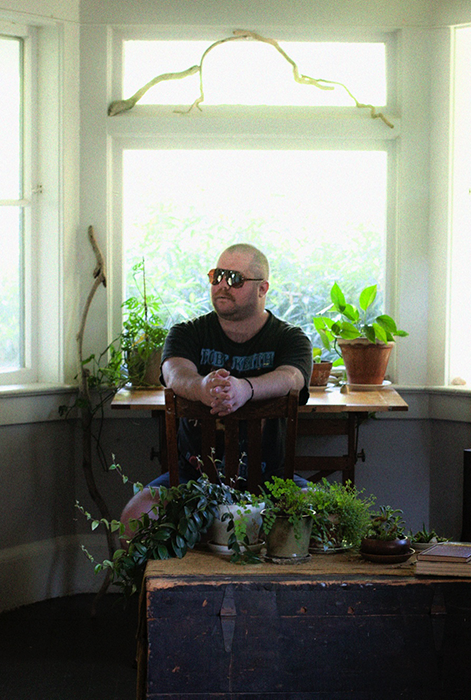 The world is loud. The wind blows hard. We need songs for shelter, and Raymond Raposa can build a shelter from almost anything: the sun-bleached bones of a drum track and a couple spare organ chords; a carpet of creeping synth arpeggios, a scaffolding of multi-tracked harmonies, a few scraps of alto sax to prop up the whole structure. Decimation Blues, Raposa’s sixth release as Castanets, marks a decade of scavenger architecture.

In 2004, Raposa gave us a Cathedral to live in, a Gothic, cavernous first album echoing with the souls of lost prophets and wayward lovers. “You are the space that holds me at night,” Raposa calls out into the darkness. “Honey, turn this room into a manger.” The arrival of Castanets was sudden and strange, like finding Notre Dame in the middle of a desert, like walking into a dusty clapboard dive in the steel and glass heart of the city.

First Light’s Freeze (2005) and In the Vines (2007) further developed the fractured approach of Cathedral. Songs drift out of the landscape, whisper some secret or truth—“There is no true work to be done / there is no sure and simple fun / that we don’t pay for”—and disappear again into the haze. This is an artist working around the edges of meaning, putting up ramshackle lyrical ramparts against the world. Raposa has known his share of rootlessness. His songs continuously evoke travel, but long for a still center. That duality is also in Raposa’s voice—think of the deadpan baritone of Leonard Cohen shot through with the high yawp of Buck Owens—a voice that knows every corner of defeat and desolation, but can still say “It’s all right to want more than this” or sing an old hymn and mean every word.

City of Refuge (2008) found Raposa recording alone for three weeks in a motel in a desert town in Nevada, crafting Fahey-like guitar miniatures and stripping his songwriting down to its struts and beams. “I’m going to run,” Raposa sings again and again, “I’m gong to run to the city of refuge,” but sees the shimmering mirage ever receding into the distance. Texas Rose, the Thaw, and the Beasts (2009) opened things back up, returning to the larger confines of Cathedral. With 2012 came an intriguing excursion: Raymond Byron and the White Freighter’s Little Death Shaker, a collaborative, full-band album that saw Raposa unfurling some loose, late-night energy, covering a surf number, and expanding his aesthetic in every direction.

Which brings us to the new Castanets record, Decimation Blues. Don’t take the title at face value. Yes, there’s everything we want from a Castanets record here: Abstracted cowboy ballads emerge from art-house noisescapes. Pristine, high-lonesome Telecaster solos dissolve into analog squiggles that wander off the edge of the keyboard. Sinister horsemen and hopeless gamblers tell their tales. Sinister, sci-fi synths purr and warble, banjos float up from the bottom of canyons. Broke-down, apocalyptic drum machines blast away fleeting moments of pastoral calm. For all of the Gothic touches, there’s a little more light pushing through the stained glass this time around. These unlikely structures ought not to stand—yet have weathered many a storm.

Decimation Blues is the music of a man who’s learned to live and build among the wreckage—twelve seemingly offhand, secretly meticulous tracks that we can hunker down in. “Still always good to be alone in someone else’s home,” Raposa sings. He’ll lend us his place, or teach us how to fix up our own. Come in out of the rain, put your shoes by the fire. The walls might shake, the wind might howl, but you’ll be safe here a while. -Will Boast